And now I´m going to talk write about Carnival.

Carnival is, hands down, the most needed foreign holiday for the USA.  It lasts for weeks at a time, flowing haltingly in typical Peruvian fashion, culminating today and last Sunday in small towns around Cusco.  The theme of  Carnival in Peru is water, and it is a time for everyone, all ages, to get anyone you encounter in the street completely wet. I took a bus with two friends, Corey and Kirsten, to a small town called Caóya to celebrate, and mojado madness ensued.

The bus ride was inexpilicably beautiful, and only cost about one dollar for the entire 45 minute journey.  Several times we passed through sections of the sacred valley, where low laying, colorful fields filled the space between incredibly dark green mountains.  As we drove along, children on the side of the streets with buckets of water or baloons would hurl them at the car windows as we rode past.

The bus dropped us off at the end of a long avenue that was packed with people running, screaming and throwing water in many different ways.  Buckets were blunt and popular, but some of the middle aged ladies prefered the little water guns, and young children in balconies loved using water baloons.  Perhaps the most effective were the large water cannons.  I noticed that boys aim for girls and girls aim for boys, which was lucky for me since boys seemed to be much more prevelant.  However, within moments of stepping onto the street, we were all completely soaked.

Corey got the wettest the earliest.

What you see in Corey´s hand is also a theme of Carnival.  I believe it´s just called spray, and it is somewhat similar to silly string.  The difference is, instead of shooting out some toxic, sticky, staining goo, it simply sprays out soap.  It isn´t strong soap, so it eventually disolves, and it was nice because my clothes needed a wash.

For a while the three of us ran around the square at the end of the avenue, chasing and being chased by various Peruvians.  Eventually we found a safe place to stay underneath an awning, and we were able to watch the traditional dances going on in the square.

After the dances we all were a bit hungry, and had been hankering for some choclo con queso since they had been selling it on the bus ride.  We were walking to a restaurant when a shirtless man, quite inebriated, chased us down with a bucket of water.  After he had soaked us, he invited us back to his house for choclo.  I was initially wary, but Corey said sure.

We followed him through a field towards a valley, and then into his home.  It appeared to be some sort of artists´colony, complete with a pregnant woman cooking.  The shirtless man, Oscar, was a drum maker, and he showed us the room where he constructs the drums.  It smelled like popcorn and spoiled milk.

They sat us down, and served us some scary looking choclo which we ate hesitantly, all praying that it wouldn´t make us sick.  Oscar and his other friends started dancing and dancing, drinking and drinking,  smoked us up (or out or down depending on where you´re from).  As they were borrachando, they decided that they needed to dance with the girls, closer and closer, until we pulled out and left.  But not before getting sprayed by a little boy that lived there, and seeing about 20 guinea pigs living in harmony on the kitchen floor.  Here are fotos. 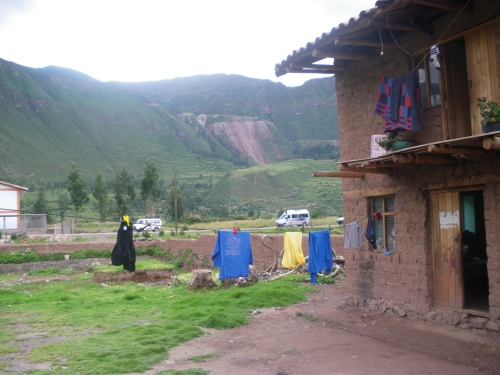 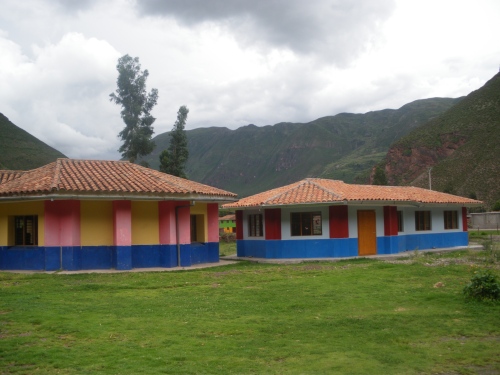 The abandoned houses behind the artists´colony where I wish they had lived.

Incredible aim for someone who is still mastering walking.

I was told not to put this on the internet.

Once we had finally extracted ourselves from the house, we were able to focus on the scenery around us.  Here it is. 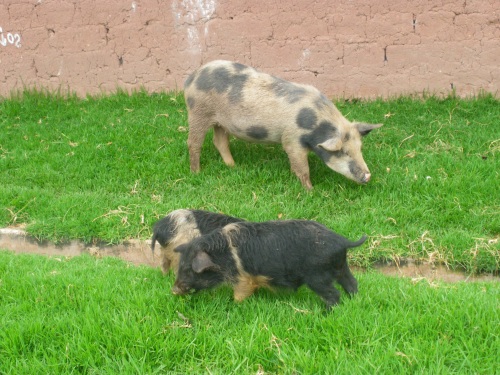 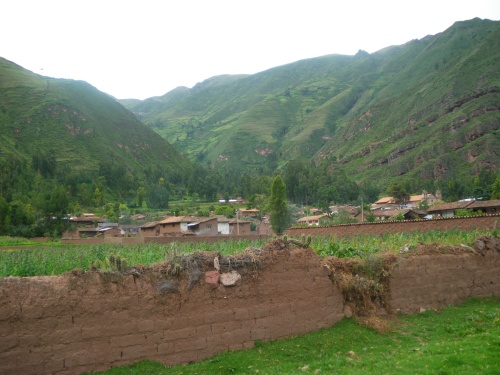 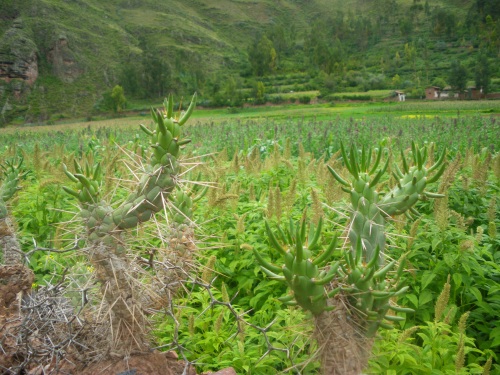 Accidently touched one of thos cacti.

We took a cab home since all of the buses were packed with people, so much that there was hardly any place to stand.  We came back to find all of the people still at the hostel completly soaked, as a gang of children had come in when the door was open and attacked everyone.  It was rough, because everyone was defenseless since there was no water in the faucets in Cusco that day, all the children had used it up.  Just another one of those things that happen here in Peru, that would make many US Americans freak out, but Peruanas take in in stride.

Posted in Into Peru, Travel Tracker